When given the opportunity to read and review Chronicles of a Lincoln Park Fashionista by Aven Ellis, I jumped at the chance. I know, I know, you shouldn’t judge a book by its cover. Let’s be honest here – we all do. And looking at this cover, wouldn’t you? 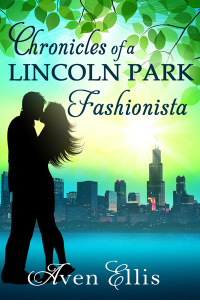 The cover is gorgeous! The blues and greens pop out at me and it feels so much different than all the other covers out there. So, on Sunday, I dove in, and I just came up for air.

Chronicles of a Lincoln Park Fashionista follows Avery Andrews, a fashionable marketing assistant afraid of flying. No big deal, except she works for an airline and hottie Deacon Ryan has been hired to follow her around and film her for an airline documentary.

Deacon’s first impression of Avery isn’t a good one. She comes off of as shallow, ditzy and only interested in shopping. Avery is annoyed by him and trying to win the affection of another man, Sullivan.

When Avery has the chance to make a big imprint at the airline and move forward in her career, Deacon pushes her to believe in herself. And both realize maybe there is more to each other than meets the eye.

I read this book quickly, and really enjoyed both characters. Ellis did a great job developing the two and showing their growth. The book moved along, and I didn’t find any spots I wanted to move quickly past. A five-star read!

Pick up Chronicles of a Fashionista on Amazon here: http://amzn.to/1yK73Qm

Excerpt from the book:

“We were supposed to be together forever,” Bree says, breaking through my angry thoughts. “I mean, he had been acting distant and irritated lately, but I thought that was the stress from graduation and getting ready to move. I had no idea he was thinking of this. None. Alex was supposed to marry me. How do I deal with this, Avery? How?”

I hug her. I have to answer this carefully. I can’t say Alex is a bastard. Because if they did work it out—which I’m not in favor of because this is a huge red flag if this is how he deals with things—but if they did, Bree would know my true feelings forever. I have to say something thoughtful. Something soothing and wise. My eyes land on the stack of magazines on the coffee table. Last month’s FLIRTY! is on top, and I see this headline: “Don’t Let His Emotional Immaturity Ruin Your Life.”

Bree moves back from me, amazement etched on her tear-stained face. “How do you always know what to say?”

“Because you’re my best friend. Now go on back to my bedroom, first door on the left. You can wash your face in my bathroom. Then curl up in my bed, and I’ll bring you something stronger than wine.”

“I love you, too,” I say to the friend who is like my sister. “Now go on,” I add, standing up and pulling her up off the couch. “I’ll be right there.”

“Sure,” I say, taking another sip of wine.

He quickly sets up a backdrop and puts his camera on a tripod. I sit down on a barstool in front of the black screen, and Deke asks me to talk about my friendship with Bree. I give a brief history, explaining how close we are and how we’ve gone through the ups and downs of life together and always will.

Deke then shuts off the camera.

“That’s interesting advice that you gave to Bree tonight,” he says slowly, his eyes piercing through me.

And damn it, despite the fact that I don’t like him, a tingle shoots down my spine.

“Well, it’s easy to give advice to Bree. We’re more like sisters than friends. And because we know each other so well, I know what to say to her in a time of crisis.”

“I see,” Deke says slowly. “So are you going to advise her on the hot colors for pedicures this season, too?”

Suddenly I can see the FLIRTY! cover on the coffee table in my head. I quickly glance over at it and see the pedicure headline, right underneath the “Don’t Let His Emotional Immaturity Ruin Your Life” one.

Coffee with cream? Check. Soundtrack for work in progress pulled up on Spotify? Done. Ready to write another romantic comedy with a swoonworthy good guy hero, a heroine you cheer for, and a guaranteed happily ever after? You bet.

Hello, I’m Aven Ellis. I work in sports television production during the day and write romantic comedies at night. In addition to writing, I’m passionate about reality cooking shows, Project Runway, the latest scent from Jo Malone (whatever it is, doesn’t matter, I want it) and hockey. Or is that hockey players? Because they’re hot.

*Clears throat for reset after thinking of hockey players* But I truly find joy in writing romantic comedy. I love crafting characters, their words, their heartbreak and triumph, with laughs along the way. There is no bigger compliment to me than having someone tell me they laughed when reading one of my books. I want my books to be easy reading, a beach read, an escape when you need one. Writing them is my escape, so I hope reading them provides you with one, too.