Seven thousand. That’s my number. I usually reach it, though sometimes I miss. But why is this number so important to me?

This is my daily step goal. My name is Tracy Krimmer and I’m slightly obsessed with my FitBit.

Almost a year ago I got my first FitBit. This was around the time my husband got his Apple watch. I loved his watch could track his heart rate while exercising and wanted such a feature. Let’s be realistic though — he was lucky to get the Apple watch. We weren’t affording TWO. The next step for me was a fitness tracker. FitBit was all the rage, so I opted for a Charge HR.

When I workout, I always turn my FitBit on exercise mode and track the activity. I check my heart rate often during my workout. It’s been great for that. What it hasn’t been great for is my sanity. I started with the typical 10K steps a day that is recommended, but let’s be honest here, I wasn’t getting close to that. So, I updated my goal to 7K. I reach it almost every day and when I don’t, I feel like a loser.

Why? Why do I feel this way?

Part of the fun of having a FitBit are the challenges. There are a few that you can set up — Daily Showdown (who can get the most steps in 24 hours), Goal Day (do anything to reach your goal), Weekend Warrior (who gets the most during the weekend) and the Workweek Hustle (who steps up their game and leaves everyone in the dust over a 5 day period). I’ll admit, I never win these. If I’m competing against myself, sure, then I win every time. Most times, though, I am in sixth, seventh, eighth place. Sometimes last. I hope one day to WIN! 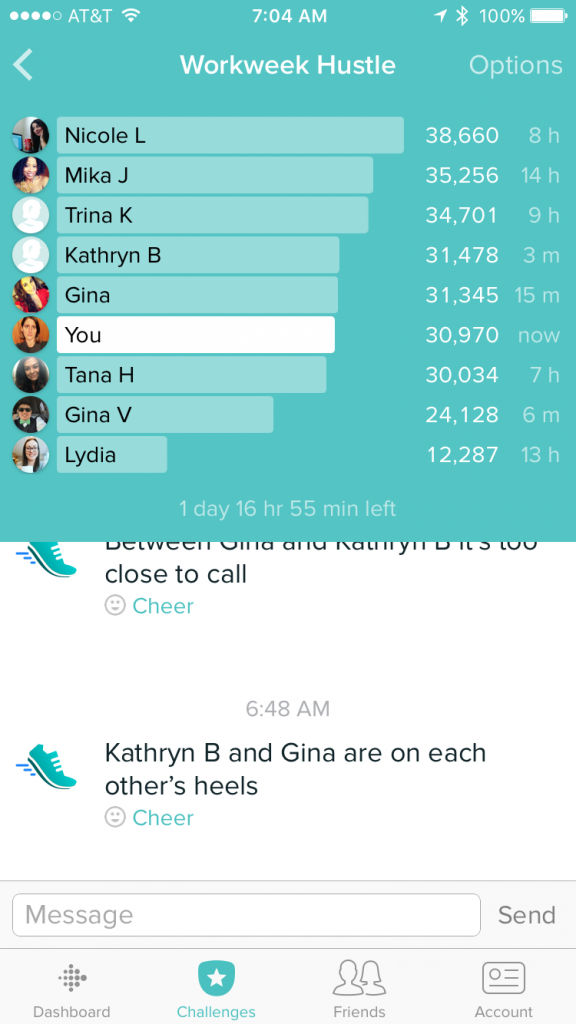 As of this morning, this week’s challenge.

I’m that person. I’m close to my steps, or close to 10K (which seems to be my goal right now but I won’t update my goal in the program), so I step at random times. When I’m on the computer, I’ll step. When I’m watching TV, I’ll step. The kids will ask “why are you doing that?” They think I look funny. I probably do. Sometimes I’ll run in place while making dinner. Any time. Any place.

My husband argues step don’t mean a lot. I kind of understand where he’s coming from. With a lot of my workout programs, I lift weights. There aren’t many steps involved. Just because I didn’t walk over three miles in a day doesn’t mean I didn’t work hard that day. I don’t deny that. However, what I can say is that my FitBit has helped me get up and move more. If I have a day I barely hit 5,000 steps I question how much I really did that day. Did I spend most of my day sitting? Since I’ve been going up to and over 10K lately, I find it’s hard to sit still. I always want to be moving. So, really, what my FitBit has done for me is make sure I’m moving on a regular basis.

Do you have an exercise tracker of some sort? Are you obsessed with it? What’s your step goal? Leave it in the comments. Let’s discuss!

Thanks for reading! To return to the FICTION WRITERS BLOG HOP on Julie Valerie’s website, click here: http://www.julievalerie.com/fiction-writers-blog-hop-mar-2016