When You Expect It To Be Easy

I ended 2015 on such a great note. In August, I released Jay Walking and my March release date for Sparing the Heart looked on point. On top of that, I used NaNoWriMo to write the first draft of Dating for Decades, and I also wrote the first draft of a novella. Basically, 2016 was before me with the potential, and probability, of three releases. THREE! I couldn’t have planned it better.

Except I hate revisions. And that’s all 2016 is about.

January and February were spent revising and editing Sparing the Heart, and I published in March as anticipated. Now I’m planning a summer release of Dating for Decades, an October release for my novella, and I’ve been asked to be part of an anthology, which is releasing in November.

I’m not busy at all. <–sarcasm

April, well, it sucked. I give off a persona of a pretty confident person. I love motivational memes and I post accomplishments on Facebook all the time. However, if one really pays attention, most of those are fitness related. When it comes to confidence, it’s exploding out of me — if fitness is involved. Ask me about my writing, and heart sinks and I want to walk away in shame and embarrassment.

When the year began, I was confident. Publishing three books in one year (and now being part of a box set), was amazing. I was on cloud nine, ready to get these babies finished and maybe even write a new series under a pen name. The thing is, I got cocky. I expected everything to be easy. I thought, “Hey, these books are written. A couple of revisions and BAM – done.”

I’ve been publishing for 2 years now. I know it doesn’t work this way. And I am well aware of how I work. After I finish a draft, I sit on it for awhile, and by the time I finish the first round of revisions, I’m anxious to send it to beta readers. I get my feedback returned and I want to punch every beta reader in the throat. Then I reread their notes and want to hug them because I understand why the changes need to be made. Once I incorporate those changes, I am so sick of my book I never want to look at it again. 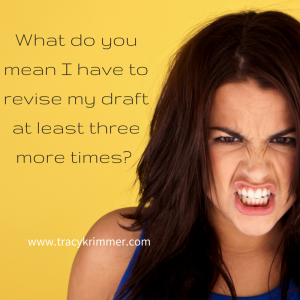 What I probably look like while I’m deep in revisions.

Publishing doesn’t get any easier with each book. It’s just as difficult as the first time. My process may get better, but then I have a hard time in other places.

Have I wanted to give up? Totally. A few times I have wondered why I’m even writing. I’ve never hit a list and my pages read were great for awhile. but things have seemed to flatline, with the occasional breath of life. I try to keep my eyes on my own paper, but I’ll admit to being a little green (okay, a lot) when I read of other’s success. I hope to get there one day, and I’m sure anyone who comments on this will be encouraging and say I will, but there really is no way to know. I can’t know, and you can’t either. There’s only hope and determination, which I’m not letting go of.

I’ll keep writing. I’ll finish Dating for Decades and publish it. I’ll write my story for the box set. And I’ll release my novella. If I can, I want to consider releasing non-chick lit under a pen name. I haven’t made that decision yet.

Right now, I’m trying to focus on Dating for Decades and when I need to step away, I pull out another project. I’m almost done with my latest Beachbody challenge (22 Minute Hard Corps). I’ll finish that and start Body Beast again. I’m meditating, too, which helps a lot. As challenging as 2016 as been professionally, these projects keep me on my toes and force me to find my inner strength and peace. My hope for the remainder of 2016 is I can find better balance and realize I can’t expect everything to be easy. In fact, if it’s too easy, I’m not challenging myself enough! 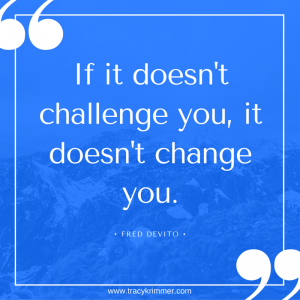