September 2, 2016 sucked. I mean, really sucked. My bulldog, Sophie, passed away at the ripe age of 12. She would have been 13 in 18 days. That’s pretty awesome for the breed. Two years prior, I said goodbye to her sister, Lucy. Both losses were devastating.

Lucy & Sophie in their younger years. (They were 3). They always wanted to be by each other.

Sophie’s crossing to Rainbow Bridge hit me hard. Really hard. I loved having her around, even if she annoyed me at times with her constant snoring or the way she licked herself for minutes at a time. But we had a routine, me and her. I knew the ins and outs of her day. I could read her. She could read me, too, I think.

The first week or so after she passed, I managed. I worked through my days, trying to write, occasionally bursting into tears. Then I came to the conclusion I missed having a dog around, a companion, during the day. A writing partner.

I started stalking the Humane Society website. I began stopping in to look at the dogs. Was I ready for another dog, so soon after Sophie’s passing? I wasn’t sure.

Then one day I went to the Humane Society and met Siren. Someone was already going to possibly be adopting her, but she won my heart. Her golden coat was soft, her brown eyes bright and curious. She was a lab – and I wanted a small dog – but she was so cute. I put my name down to adopt her if the first fell through.

It didn’t. I thought about Siren for days after I heard she was adopted. I was disappointed. It was then I realized I did, indeed, want a lab.
Fast forward to October when we brought Arya home. A black lab, bouncy, loved her belly rubs, and biting hands. The first few weeks were especially rough, and I cried many times wondering if we made the right decision by getting a dog so soon. 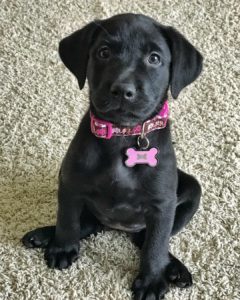 Eventually the biting stopped, which was wonderful. Then the poop eating began—and is still going on. She jumps on everyone, but we’re working on that. She still likes belly rubs. She’s learning to play, but doesn’t quite realize she needs to drop the ball for us to throw it.

So what’s my problem? Why am I feeling sad? With Sophie, I shared a special connection. I don’t have that with Arya and it scares me. It scares me because I wonder if I will ever have that connection. She’s only seven months old, and we’ve only had her five of those, so time is needed. But it really, really scares me.

Arya after a trip to the spa.

I’m a dog person, one-hundred percent. I love dogs and I think I’ll always need one in my life. But did I push for it too soon? Should I have given it more time?

I haven’t a clue, honestly. Some days are better than others. Some days she’s my girl and she’s a joy. Other days she drives me nuts and I regret rushing into it. I wonder how long it will take to form a connection. 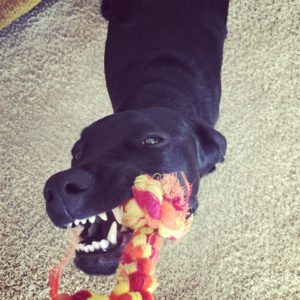 How about you? Have you had an animal pass and quickly bring home a new one to repair your heart? Did it work? Or did you have the same problems I am experiencing right now?