Two weeks ago I ripped through a book called Evolution: Angel by Starla Huchton. It’s the first book of a series. I’m so anxious to read the next book, which releases next month. 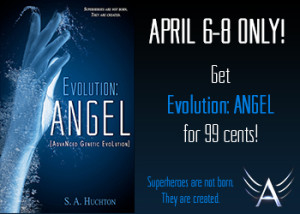 Here is the cover for Evolution: Sage: 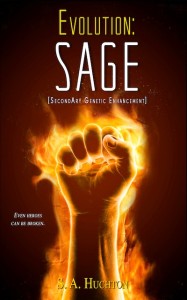 “Devastated by her choices, Candace Bristol is on the brink of losing it all: her mind, her hope, everything she thought she was.

But from the ruins rises new purpose. An enemy has emerged and it will take everything to combat this new threat. Broken as she is, picking up the pieces and carrying on might be the hardest battle to win, but it’s either fight, or lose what little she has left.

Amongst the wreckage, hope still burns. The flicker of a flame kindles something within her she thought was dead.

Love can break you.

So, too, can it bring you back to life.”

And here’s a little sneak peek at the book…

The emotions overwhelmed her as she slipped into the pool, sinking to the bottom.

Candace didn’t know if she deserved to feel any of this, but there was no arguing with her connection to the water. It didn’t care about her mistakes. She had been missed.

She swam, moving back and forth through the water, soaking up more and more of the solitude and unexpected peace. Closing her eyes and floating, she turned inward, pushing past all of the hurt, all of the guilt, all of the loss, and drifted in a sea of calm. In the back of her mind, she knew this relief was only temporary. Eventually she would have to return to her other existence, the one where everyone wanted— expected— things from her.

Where she expected things from herself.

Jackson was right, of course. As much as she hated to admit it, his words were the slap in the face she needed. Once again, Candace was in his debt.

She frowned. There was a strange back and forth between them, an ever-shifting imbalance of helping one another. Funny, considering he was such a jerk otherwise. If he were consistently nice, maybe it wouldn’t sit with her so uncomfortably. As he ran more cold than hot with her, she never knew where she stood or what to expect. It was frustrating. Jackson Lawrence was not easily categorized or pinned down. Honestly, she couldn’t say with any amount of certainty whether or not she detested Jackson or kind of liked him, although the thought of liking someone as unlikable as him disturbed her on multiple levels. Did she have that much self-loathing that she’d attempt to spend more time with him?

She shivered. No. Definitely not. She more or less hated herself, but wasn’t about to hang around people who made her feel worse.

She took a breath and dove backwards, under the surface again. Life was too complicated. This was simpler. Maybe she could hole up here and no one would notice.

Swimming to the far end, she emerged at the side of the pool to catch her breath.

A crowd of people waited for her. She stared back at seven shocked faces.

“You’re still in trouble, Jackson. Shut the hell up.” True stepped to the edge and crouched down. “You scared us, sugar. What are you doing here?”

True shook her head and grinned. “Didn’t you hear the alarms? We’ve been looking for you for thirty minutes. Why didn’t you tell someone?”

Candace shot Jackson a sidelong look. “There was no one to tell.”

Amir Jones rubbed his face and sighed. “Yeah, we noticed.”

Dina was silent, but shifted nervously. Hector was also quiet, but looked more pissed than nervous.

“You all right, Candy Cane?” True asked. “If you want some company, I can suit up and—“

“No!” Candace interrupted. “God, no. Sorry, True, but all I really want is some peace and quiet without people constantly talking to me. No, I’m not okay. I probably never will be. But, holy hell, if I have to deal with one more day of everyone treating me like a broken doll I might actually consider drowning myself just to avoid it.”

True grimaced. “You know we’re all trying to help you, right?”

She sighed. “I know, I know. But, seriously. I can’t think with everyone hovering like this. I just… I can’t. I appreciate what you guys tried to do. Really.” She pushed back from the side, treading water. “No one else can fix me, True. I’ll figure it out.”

She dove under again, blocking out everything but her connection to the water. The next time she came up for air, they were gone. 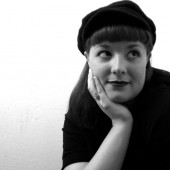 A geek of all trades, Starla Huchton has been crafting stories in various genres since 2007. Her first novel, THE DREAMER’S THREAD was released as a full cast audiobook podcast, becoming a double-nominee and finalist for the 2010 Parsec Awards. After releasing short fiction of steampunk, noir fantasy, and other varieties, she released the first three books of the Sci-Fi Romance ENDURE series in 2013. All three books of the EVOLUTION series will be released in 2014, as well as a Steampunk Fantasy novel, MASTER OF MYTH (the Antigone’s Wrath series, book 1), which was the first place winner of the Crested Butte Writers’ contest, The Sandy, in 2012.

When not writing, Starla trains three Minions, a black lab, and a military husband whilst designing book covers for independent authors and publishers at designedbystarla.com.