Samantha Grey has released her new book, Unveiling You!

The price of secrets can be too high… 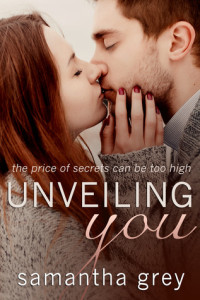 Amy is starting the internship of her life for a prestigious antiques dealer. She knew it would look good on a resume, but a surprise trip to Paris and an assistant who is determined to keep her around make her want more. She could make this into a permanent job.

If it weren’t for Caleb. He’s returned to his grandfather’s for a new job, even though he doesn’t need the money after selling his company. She’s up to the competition to prove herself, but soon it’s hard to ignore the sizzling tension between them. Neither are willing to give in if it means losing the chance at the job, but their attraction may be too strong. They risk everything if they’re found out — and Amy has been keeping secrets since she arrived, ones that could separate them forever.

Read on for an excerpt from Caleb’s point of view:

Amy’s eyes widened as she looked up at me. “What are you doing?”

“We’ve got an hour and a half before we have to go back to work.” I dropped my button-down on the dock, then stripped off my undershirt. Amy looked away, shaking her head. Even from up here, I could see how pink her face was. Her blushes were hilarious. Adorable. I dropped my pants next, my boxer briefs only a foot or two away from her face.

“You dare me?” She looked at me and glanced away quickly, like she’d forgotten I was barely clothed. “What is this, fifth grade?”

I laughed, then jumped in. I plunged into the cool water. So many memories in this lake. Birthday parties, lazy days, with my parents and my friends. I came up, hooting, and when I turned to look at Amy, she was fighting back a smile. Her shirt had wet spots from when I jumped in, and I grinned.

“You’re such a wuss,” I said. “Live a little. You’re not going to let me show you up, are you? Miss I-have-a-degree-and-I’m-not-even-twenty-one?”

“Do you have to make everything a competition?” she asked.

She stared at me for a moment while I treaded water. “How deep is it?”

“I can’t touch.” I motioned to another area of the lake, where the rocks led into the water. “It’s more shallow over there, if you want to ease into it.” My voice was heavy with condescension.

She stood up, and I raised my eyebrows.

She shrugged and turned her back to me.

“Oh, come on, I didn’t turn around!” Could I be any more of a douchebag?

She said nothing as she took off her shirt. Oh, shit. She wore a pink bra, and the backs of her shoulders were freckled. Her narrow waist dipped in, and she stepped out of her shorts. Matching underwear, bikini cut. She had fuller hips and thighs than I had realized; they’d been hiding underneath her skirts and pinstripe pants.

What happened to not checking her out?

She turned around, and I only got a glimpse of her front before she jumped in. Her bra made her boobs look bigger than they probably were, framing her cleavage, and something dark was on her hip, right on her hip, above the edge of her underwear.

She came to the surface, taking in a deep breath. She rubbed her eyes and brushed her hair back, but it was still messy on the left side of her face.

“Do you have a tattoo?” I asked, grinning.

She was at least five feet from me, treading water, only her neck and face out of the water. I could see part of her chest under the water, but past that, it was cloudy, obscured so I couldn’t see that waist or full hips or slim legs.

“Do you?” she countered.

I turned my back to her. I wasn’t sure if she could see it, so I swam to the dock and leaned on it, bringing my back partially out of the water. It was a poem written by Rainer Maria Rilke, translated from the original German.

Before us great Death stands
Our fate held close within his quiet hands.
When with proud joy we lift Life’s red wine
To drink deep of the mystic shining cup
And ecstasy through all our being leaps—
Death bows his head and weeps.

You can also enter to win gift cards for Amazon or Barnes & Noble!