You Can’t Watch ANYTHING With a Writer!

First, thanks so much to Deb Nam-Krane for hosting this awesome blog hop! When I first heard about it, the concept was “I Totally Saw That Coming” or “You Can’t Watch Anything With a Writer!” If the lovely hostess doesn’t mind, I’m approaching this more with the latter, although I will address guessing plot lines and twists.

There are many shows or movies I watch and predict what’s going to happen next. Have you ever watched something with a writer? We’re pretty annoying. You’re watching a TV show or movie and either we shout out something that is about to happen, or it happens and we say ….

Most movies (and books) follow a formula. The formula may alter slightly from story to story, but the basics stay the same. Romances are known for this. Girl meets boy, they fall in love, something breaks them up, and then big romantic gesture brings them back together. With many television shows, especially sitcoms, the situations and outcomes are easy to predict. Many times, you think you know, but you’re wrong.

I fall into that group.

Watching television with me can be quite annoying. I don’t talk throughout a show or a movie (well, most times), but if you’re not getting a “What did she say?” you’re getting, “I bet …” followed by my commentary about what is about to happen. When watching How I Met Your Mother, of course the entire series you’re questioning who the mother may be. Let’s be honest, when we all saw that yellow umbrella, we all knew (because the hints dropped regarding the umbrella) … but we went back and forth hoping it was Robin somehow. I remember the entire finale I shouted and guessed and went back and forth, even through the tears. Watching Gotham the other night, I kept questioning relationships … did Batman have a relationship with Catwoman in the movies? Did the Penguin have this odd relationship with his mother all along? Oh! I bet The Ogre is going after Barbara! I’m sure it gets quite annoying for my husband.

Me during the How I Met Your Mother finale.

Well, a lot of the time. I wasn’t wrong about The Ogre. I like to think I watch movies and shows with a writer’s mind. Is it bad I almost always get it wrong? Or, maybe, if everyone else guessed it, I had a better plot idea! Could it be? When I start a movie, I go in with a certain expectation. I like to take a stab at the jumps and hurdles the main characters cross along the way. Yes, nine out of ten times I’m wrong, but then the “What If” question starts running through my mind. This, my friends, is how story ideas are sometimes born. As a writer, I start to question what I think could or should have happened. 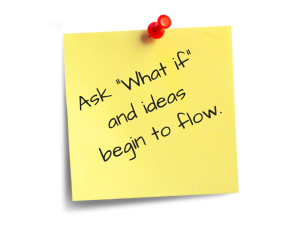 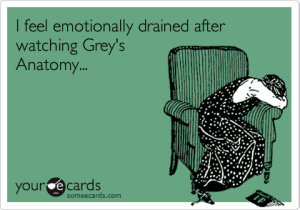 All Things Come to an End

Let’s talk Grey’s Anatomy for a second, kay? There’s definitely spoilers here because who doesn’t know already? On April 23rd’s episode, Dr. Derek Shepherd was killed off. Did you see that coming? No?! I did and I stopped watching the show when Lexi and McSteamy left. All I saw were commercials and I knew. When it comes to guessing on tv shows, sometimes the media helps a bit. I’ve read interviews with Patrick Dempsey and he stated how he wants to pursue his racing more. He’s given Grey’s years of his career, and it was time. (*Disclaimer – I’m not saying it wasn’t sad. I may watch the episode, still, and if I do, I’ll cry like a baby.) The outrage and shock online over the episode didn’t surprise me, and neither did the “shocking ending.” Newsflash: it wasn’t a shock. Many are outraged and upset, but let’s face it – it was great writing. For more about this episode, read Jayne Denker’s spectacular post on it: McWhatJustHappened?

I Totally Saw That Coming … But What Just Happened?

In preparation for this post, I planned on remembering all the times I guessed and was right. My memory when it comes to those things are shot. Trust me, there were plenty of times I saw a show and guessed what would happen …. but heck if I recall it. I remember Seinfeld and Friends episodes, but the great thing about re-watching some shows and movies for me is I totally forgot what happened. Spoilers don’t bother me at all, either. Well, if someone had given me the twist from Gone Girl (the BOOK, people! always better), THEN I may have been upset. Generally, though, I don’t care. 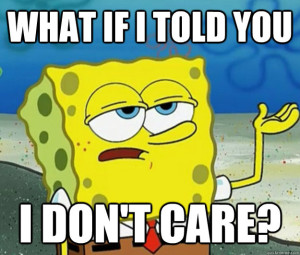 I don’t always want to guess. Isn’t part of the fun being surprised? Instead, I tend to approach more of “This is what I want to happen” and see if I’m correct in the outcome. I would much rather be completely wrong and shocked. Who doesn’t love a plot twist?

What shows/movies did you “totally see it coming?”