Cover Reveal: Back to December by Heather McCoubrey

Today I’m happy to bring you the beautiful cover for Back to December by a dear friend, Heather McCoubrey. I met Heather through Twitter, and we’ve now beta read each other’s works and gotten to know each other. When she sent me this cover, I loved it. I’m a big fan of pink (it just happens to be my favorite color), so I fell in love with this cover.

I hope you love the cover as much as I do. 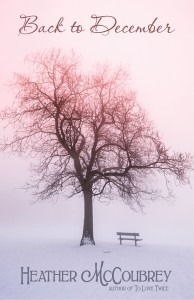 Thanks to an abusive mother and an absent father, Anna Blackhurst has only known the love of two people: her Gram and her best friend, Niki.

When Anna meets Cooper Reed in a smoky club, she’s immediately drawn to his good looks but isn’t prepared to open herself up to a relationship. As time passes, Anna finds herself falling in love with Cooper and she begins to rethink her future. Maybe, despite her childhood, she can have a happy-ever-after.

But when her mother is in a terrible accident, she again sinks her claws into Anna and Anna’s world is thrown upside down. Despite Cooper’s unwavering support, Anna walks away only to regret it immediately. In order to heal, not only herself, but her broken relationship, Anna must stand up for herself and accept that the only way she’s going to be happy is if she grabs ahold of it herself.

Heather McCoubrey is a native of Maine but having moved all over the U.S. as a child, she doesn’t sound like one. She’s been writing since middle school when a teacher taught her she could create her own stories instead of just reading them. That year she had some of her first poems published in the school magazine and from there she graduated to writing a full-length novel in high school (which has been collecting dust on her shelf ever since!). She is the self-published author of To Love Twice, her debut novel. Her second novel, Back to December, is scheduled to be released in June 2014 and the novel that’s been collecting dust on the shelf, Emily’s Choice, is scheduled to be released in October 2014. Heather resides in Pennsylvania with her husband, two children, Rex the chihuahua and Fatty the goldfish. When she’s not being super-mom and wife, she ekes out time to write, watch football, practice her British accent and dream of living on an island where it’s eighty degrees year-round.

You can find Heather McCoubrey on:

Find the Book: To Love Twice:

Blurb for To Love Twice:

During an intense and terrifying experience, Kate meets Brad Walker, the man of her dreams. After a blissful ten years, Brad suddenly becomes cold and distant. A few months after giving birth to their daughter, Kate leaves and files for divorce. When he dies a few days later and his secrets are revealed, Kate is devastated.

Five years later, Kate has made a successful new life for herself and her daughter, despite the fact that she clings to his memory and grieves for her husband. While in London on a business trip, she meets London’s most eligible bachelor, Edward Kent. She is enchanted with his manners and dazzled by his attention. He’s everything she could wish for, and everything she’s afraid of. Edward finds her refreshing and lovely and quickly realizes that he’s finally found the one he wants to spend the rest of his life with.

Can Kate set Brad’s memory and her fears aside long enough to find happiness with Edward and finally see that she is able To Love Twice?