B is for Bulldogs

Today is day two of the #ATOZChallenge, and the letter is B! I chose B for Bulldogs because bulldogs rule!

In September 2003, two beautiful bulldogs were born. At Thanksgiving, they came home with me and my husband. Their names? Lucy and Sophie. 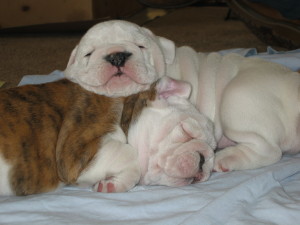 Many refer to the Bulldog as the English Bulldog, and this is to distinguish between the American and the French. The bulldog is muscular, wrinkly, and hilarious. I’m a homebody, which is perfect for a bulldog. As puppies, my dogs were very active. As they age, they tend to prefer napping over playing, although occasionally a burst of energy will come through. We call those the “zoomies.” They snore, but I do as well.

Taking care of a bulldog is a lot of work. Every night, ears need to be cleaned, folds cleaned out, and they are partial to many issues.

Lucy, who passed away in June 2014 at almost age 11, was our “typical” bulldog. She suffered from frequent UTIs, which, thankfully, we got under control with a special diet and medication. Her thyroid didn’t work properly, and if we missed a day of cleaning her nose fold, it got infected. I always joke we probably bought a vacation home for our vet a few times over with her medical bills. But, she was awesome. 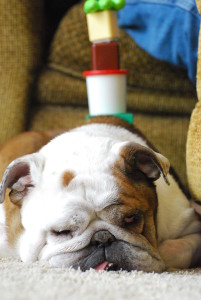 Lucy was a hoot. She doesn’t look impressed, but she was.

Sophie, on the other hand, she’s unique in that she doesn’t really have any issues! She’ll be 12 in September and all she needs to make her happy is cuddles on the couch.

Sophie after a day at the spa.

I miss Lucy every day, but am so thankful Sophie is still here with us. Will we get another bulldog? Probably not. The next dog we welcome into our family may be a pug, but that is well into the future.

One of my favorite thing about Lucy? The fact she would fart, look back at her butt, and walk away. Classy. And Sophie? Every morning after she eats, she runs full force into the couch, flips over, and rubs her back on the floor.

Are you a dog lover? What kind of dog do you have?