C is for Candy Crush

I am a recovering Candy Crush addict … and I’ve relapsed. Over a year ago, I got stuck on a board for the addictive game, and I decided I had enough. I “checked myself in” and deleted the game anywhere I could access it. How freeing.

Then, in the depths of writing my upcoming novel, I hit a road block. When this happens, most of the time it’s not that I’m out of ideas or I don’t know where to take the story, but I’m burned out. I’ve written so much, I need a break. Besides the normal surfing Twitter and Facebook, I found myself clicking on the Candy Crush icon, and WOW – it saved my level! Just for fun, I played the level I had been stuck on for nearly THREE MONTHS before I quit. A few tries and I passed it! 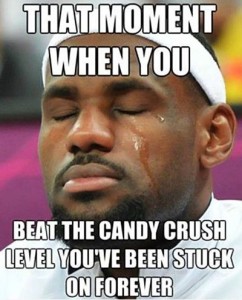 This is how I felt.

Yeah, I know. Whatever. Call me crazy. My playing Candy Crush, though, is no different than people who play their Xbox or Playstation, or Flappy Bird or whatever. It’s a total time suck, but there is something about the satisfaction of moving to the next level. Now when I’m writing, once I finish a chapter, I reward myself with a few games. When I eat lunch, I usually play, too.

Let’s be honest. I suck at most games. SUCK. I can’t play these new gaming systems. I’ve tried. Even the XBox with the Kinect I have problems with. The only way I can shut that thing off is to tell it to. “XBOX TURN OFF!” These days, there are way too many buttons on the controllers. Swiping candies is EASY. Give me back this controller and game system, and I may be able to play normal video games. 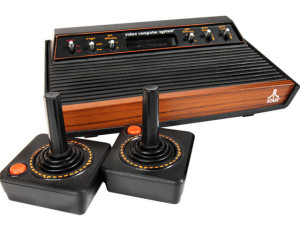 The best gaming system ever.

Not to mention, I’m not a considerate video game player. I get mad, and yell at the TV. Not a pretty sight.

I’m honestly not that great at board games, either. I love Scrabble, and one would think as an author I rock at that game. Not one bit. I can’t draw, so Pictionary is out, and trivia is not my strong suit, so that means Trivial Pursuit is a bust. Heck, I can’t even win at Checkers. So, Candy Crush it is. 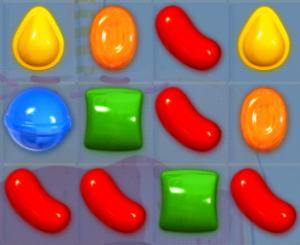 Since I am now also playing Candy Crush Soda Saga, though, I probably should make a call: 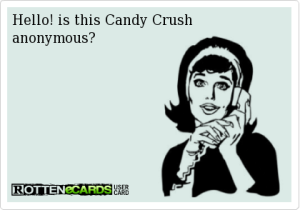 Tell me, do you play online or video games? Which ones?