F is for Friends! (Or Top Ten Fav Friends Episodes)

Today is a little different ….  I didn’t want to combine the Top Ten with the A to Z Challenge, but since both start with an F, why not?

Friends is one of those shows that is timeless. No matter what year it is, or how old I am, I love the show. It makes me laugh, sometimes even cry, and has some of the best thirty minutes of television (or 22, I suppose, without commercial breaks).

Picking only ten for my list is not easy. Every episode has parts that make me laugh hysterically. I’m going with the ones that can throw me into a laughing fit. In no particular order:

1. The One Where Emma Cries (Season 9, Episode 2)- There are so many great things about this one. My favorites are when Joey tries to get Ross to punch him, and Ross ends up hitting the light pole. Then, later on, Ross gets punched again (on accident – he’s supposed to duck.) In this episode, Joey also doesn’t know how to use quotes around words properly. “Sorry.” Ha!

2. The One With Ross’ Inappropriate Song (Season 9, Episode 7)- Yes, the Baby Got Back song is funny, but that’s not what I love about this episode. Phoebe meets Mike’s parents, and it goes as one would expect. Phoebe tries to come off as a high-class, wealthy woman, but ends up talking about a pimp spitting in her mouth, and punching Mike’s dad in the stomach (after he’s had surgery!)

3. The One With The Ride-Along (Season 5, Episode 20)- I love this one partly because I love Michael Rapaport. In this episode, Ross, Chandler, and Joey go with Gary, played by Rapaport, on a ride-along in his cop car. A car backfires, and Joey thinks it’s gunfire. He saves Ross. Well, actually, he saves his sandwich, but Ross thinks he’s saving him. 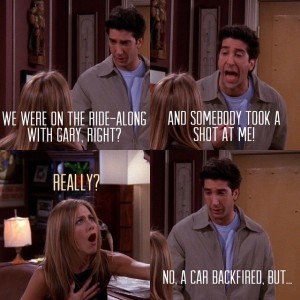 4. The One Where Everyone Finds Out (Season 5, Episode 14)- Rachel and Phoebe decide to mess with Monica and Chandler as they try to hide their relationship. Phoebe comes onto Chandler, and eventually Chandler breaks, proclaiming his love for Monica, when he can’t take it anymore. My favorite line from this episode is when Phoebe says, “So … this is my bra.”

5. The One With All The Kissing (Season 5, Episode 2)- This episode I love when Chandler says he has to go to work, gets up, and lays a big kiss on Monica. This is when their relationship is still a secret. Chandler covers it up by kissing all the girls. Monica covers up, too, by pretending Chandler’s kisses are disgusting.

6. The One With The Embryos (Season 4, Episode 4)- This is the episode the gang (less Phoebe) plays a trivia game and Monica and Rachel lose the apartment. One of the best episodes ever. “A transponderer!”

8. The One With The Baby Shower (Season 8, Episode 20) – This episode is hilarious. If the entire episode were Chandler, Ross, and Joey playing Bamboozled, that would be awesome. The baby shower is funny, but this tops the cake.

9. The One Where Chandler Gets Caught (Season 10, Episode 10) – Joey thinks Chandler is cheating on Monica, when, in fact, he’s meeting with a realtor because Chandler and Monica are buying a house. I love this episode because of one line. Joey says, “I’m gonna thump you.” LOVE IT!

10. The One Where Chandler Takes a Bath (Season 8, Episode 13) – In this episode, Monica draws Chandler a bath, and he’s resistant at first, then loves it. Everyone eventually ends up in the bathroom with Chandler, and he’s very embarrassed. Great episode!

There are so many, I could go on and on. I tend to enjoy the later episodes more, maybe because I love Chandler and Monica as a couple. No matter what, though, I know Friends will always be there for me.

What are your favorite Friends episodes?