E is for Exercise!

Today I tackle a subject people either seem to love or hate – exercise!

When I was a kid, I was as active as a book nerd could be. I didn’t play sports or anything like that. As much as I suck at board games, I’m even worse at physical sports. I recall the summer before I entered seventh grade and my brother entered high school. He attended summer school to get a head start on classes (I ended up doing that too, two years later, but, really, what did taking a Mafia class have to do with my future?). During those mornings, my mom would be at work, and my brother would leave the house by 7:30 and came home at around 11. I exercised from about 8 until 10 every day. Every. Day.

I wasn’t a fanatic. Really, I wasn’t. I was twelve years old and bored. I turned on some TV station – I can’t remember what it was called – and did their workout shows. I remember specifically Denise Austin. Remember those awesome shows with the swimsuit and tights? I even fit the role sometimes and completed the outfit with a headband. I didn’t wear myself down because I wasn’t pouring sweat, even after almost two hours of exercise. Of course, I was twelve and in much better shape! 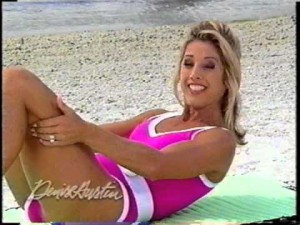 Fast forward many years and exercise was the last thing on my mind. By my wedding day, I was in a place I didn’t want to be weight wise. Brides always set out to lose weight before their wedding. I don’t know how many that actually happens for. I went the opposite. I attempted to lose weight multiple times, and committed a few times, though it didn’t last. I’ll admit, I often had a birdie in my ear discouraging me. She was a friend, but one who didn’t put any weight into the benefits of working out. Finally, in around 2006 I think, I found Gilad Bodies in Motion and Sharon Mann, and managed to lose about fifteen pounds.

Years go on, motivation is lost, babies are had, and soon I’m losing the battle of the waistband again. In 2009, my husband and I completed P90X together. We worked out every night, six days a week, for 90 days, for the hour and a half each session was (luckily, a few were less). I lost about 18 pounds and he lost almost 25 I think. We became P90X grads. Awesome! I did sporadic workouts after that. Eventually, I found myself back where I didn’t want to be.

In 2014, I tried to maintain my own schedule working out. I would be too tired, or flat out didn’t want to. Then a friend introduced me to the Bikini Body Mommy Challenge. I completed the first 90 day session with results. Then, I moved onto the next 90 day session, BBM 2.0, and this past Saturday I completed BBM 3.0! I’ve been working out for over 270 days straight (for the most part. Sundays are rest days and I was sick a few days there, but I always caught up).

I’ve come to the conclusion that in order to keep exercising, I need to follow a 90 day workout plan. I need to have the days set out ahead of me. If I decide to just “pick” a workout, it won’t get done. Here and there I will do other things. I actually completed Couch to 5K, and the other day, I jogged for fifteen minutes straight on the treadmill, which, a year ago, I would have deemed impossible. With the last bout of BBM, I didn’t lose a pound; in fact, I gained weight. I think, though, my body needs a change.

Today, I enter a new 90 day journey, and this time with my husband. In 2009 we became P90X grads together. This year, it’s P90X3. (Yes, I realize I am missing P90X2, and maybe I will do that one eventually). We plan on working out in the evenings, together, which I absolutely love. We’ll keep each other accountable, and, if you know Tony Horton at all, he’s a dork, and he’s tough. I love P90X (especially yoga). 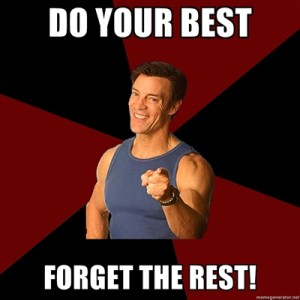 Hopefully in 90 days, I can write about my success. Do I want to lose weight? Sure. Honestly, though, I don’t even look at the scale any more. There isn’t a point. All I want is to be comfortable in my own body. And once I am, I want to keep going, and get stronger. Look, folks, I’m not looking for a six-pack. It won’t happen, and I’m fine with that. Remember, exercising isn’t only about losing weight. It’s about feeling great about yourself and being healthy. My book coming out in the summer of 2015, Jay Walking, will focus on that 🙂

Do you workout? What programs do you like? What works for you?