J is for Jay Walking!

Nope, that’s not a typo! Jay Walking is the name of my next book, releasing Summer 2015. I don’t have a firm release date yet, but will let you know as soon as I do.

A little about the book:

Chelsea Wyatt, a single-mom trying to build a life for her and her son, is sick of the body she sees in the mirror. A daily diet of Cookie Crisp cereal is not doing wonders for her mood or her figure, and it’s time for a change. Setting out to get fit, she commits herself to a daily walking plan, forcing herself to give up her all-sugar and carb diet, a difficult task at her donut obsessed job.

But her plan goes sideways when a stumble on the ice puts her in the arms of Jay, an attractive young man out on a run. They grab coffee together, and Chelsea finds herself thinking about him long after their short meeting. The thought of dating again hadn’t crossed her mind in years, and she doesn’t even know if Jay is available, or if he would be interested in her despite her unfit body.

Just when she has a handle on her new routine, her past catches up with her, throwing her blossoming relationship with Jay and the rest of her life into chaos. Can Chelsea hold onto the people she loves most, or will a wrong turn set her up for failure?

Here is the cover, which I love: 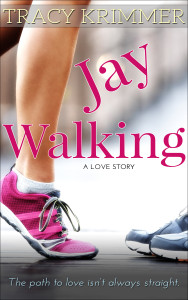 I first decided to write this book when I began doing the Bikini Body Mommy workouts. How many moms out there struggle with the baby weight? How many want to get back to their pre-pregnancy size? And, does it all really matter? Chelsea is a character from my first romantic comedy, Caching In. She is Ally’s best friend and in a one-way relationship. I really wanted to continue her story, so I wrote Jay Walking. Jay is the hero’s name. Clever, right? LOL.

This book is slated for a Summer 2015 release. The sooner the better because I can’t wait to share it! I created its first teaser image, so here it is!

If you haven’t read Caching In, it’s on sale until Sunday, April 12th for only 99 cents. It’s usually $3.99 so grab it now! Caching In is Seth & Ally’s story, and their geocaching romance.

Do you love the teaser? 🙂